Reviews of the Best FX Brokers

The initial public offering of Facebook on 5/18/2012 caused quite a stir. No wonder, it was one of the ten largest IPOs ever, and the third largest in the United States. The evaluation of the entire company on the day of the IPO was 104 billion dollars. A lot of money for a company that last year, in 2011, just made 3.7 billion in revenue and a profit of one billion. And a lot of money per member – a single Facebook account was valued at $ 115.

Now that the dust has been settled: is it worth buying Facebook shares? Or should you short sell them? In this article, we are going to discuss the long-term opportunities and risks associated with the largest social network of the world.

No matter how the stock will develop in the future you can trade with CFDs at Plus500, one of the very few brokers where you can buy and sell Facebook CFDs in a matter of seconds.

Just click here to create your account at Plus500 and trade any IPO in the future!
CFD Service. Your capital is at risk.
In theory, all of the following opportunities and risks should already be included in the share price. But if this were true, there would be no more price changes of stocks – except for when news are published that have a material impact and that were not yet known in the market. We believe that many of the opportunities that Facebook will have in the future have not yet been fully understood by stock market analysts.

Let’s have a closer look at these two revenue drivers:

Currently, Facebook counts around 900 million members. Looking at the growth in the past, the mark of one billion members should be reached soon. After that, growth will probably slow down. But 1.2 billion Facebook users by 2015 seems to be a realistic target. This would represent an increase of 33% compared to spring 2012. If everything else would remain the same, revenues would increase by a third and profits would increase even more (because not all costs are variable).

This revenue driver has far more potential than the former. This is the main lever for Facebook to boost revenues and profits and its potential has probably not yet fully been recognized by stock market analysts.

Facebook currently earns money mainly through advertising. Depending on which model an advertiser chooses, he either pays money per impression or per click. Because ads with low click-through rates become more expensive as time goes by, the click rate is ultimately the decisive factor in both cases.

There is a huge potential with regards to the click rates on ads at Facebook. The current CTR values ​​on Facebook are still very low. Advertisements from the right column are clicked only in an estimated 0.25% to 0.5% of all impressions. So about every 200th to 400th viewer of a page clicks on one of the roughly five ads. By comparison, Google Adsense ads usually get CTR in the range of 1% to 5% and the ads shown on the search results pages may be clicked even more often. So there is a potential of increasing revenues by a factor of up to 20x or even more by just increasing CTR. And even small changes Facebook may make in the future will have a huge leverage. The exact value cannot be estimated, but it is not difficult to forecast that the social network will multiply its revenues in the next years by just improving click-through rates on its ads. This could be easily done with a more prominent placement of ads. For example, compare the following two screenshots 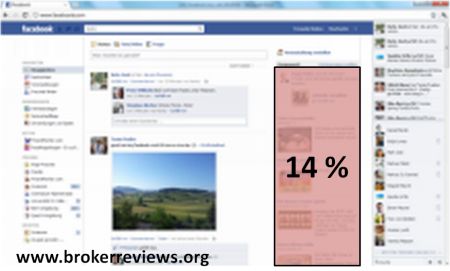 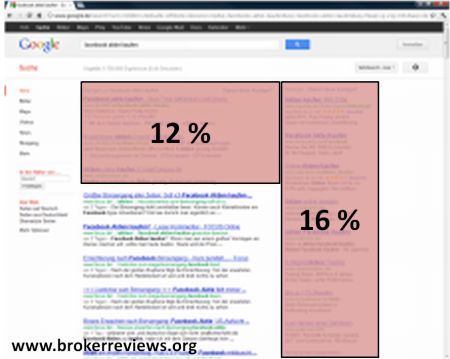 At the same time, the advertising space on a website is limited. Because businesses move their marketing budgets more and more form the traditional channels like print and TV to the Internet, the prices per click will continuing to rise in the future. So even if Facebook leaves the whole website design unchanged, it will earn more.

The second lever to increase the earnings per user is to introduce a fee for certain services. Sure Mark Zuckerberg doesn’t want to scare away his standard users. But why shouldn’t Facebook charge a fee for certain services? Think of free mail services. These are also free, but when you want more disk space or better spam or antivirus protection, you will have to pay a fee. This may sound unthinkable, but in combination with the added value to the user a small fee for great value adding services can be justified. In addition it is not carved in stone that companies can use Facebook pages forever free of charge. Web hosting and advertising ultimately costs money and companies are used to pay money for it. A prominent example of a service that recently introduced a fee is Google Maps, where power users now have to pay for the access to the maps.

Long-term oriented investors should also worry about the risks the Facebook stock is facing.

The technology behind Facebook could be rebuilt with a tiny fraction of the current valuation of the company. There are even open source programs like Dolphin from Boonex which have a similar functionality and are available free of charge.

Rise and Fall are Close to Each Other

Even though Facebook is in a unique situation of being the largest social community in the world, this dominance must not last forever. It is probably fair to say that most users do not want to maintain profiles on various social media communities. So the barriers to enter this market (to replace Facebook) are very high, which is also shown by the currently short time spent on site on the competitor Google +.

But when we have a look back at the short history of high-tech and Internet stocks, we find plenty of fallen heroes. Here are two examples of companies that once dominated their market and now have become unimportant or have lost many of their clients.

Nokia: For more than a decade, Nokia was the largest mobile phone manufacturer in the world. In the first quarter of 2012, it was replaced by Samsung. Nokia has missed the leap from a simple cell phone to the smartphone and the outlook for this company is not good.

MySpace: The first large community of North America was rapidly surpassed by Facebook. In August 2006, MySpace cracked the 100 million users mark. Three years later, it had more than 250 million accounts. The purchase by Rupert Murdoch and his News Corp., however, didn’t help MySpace to stand a chance against the new star Facebook. Some experts estimate that the number of members at MySpace has shrunk to less than 50 million at the beginning of 2012.

Part of the value of the Facebook stocks consists of what this social media company knows about its users. Even if all users agree in the “fine print” in the T&C to give access Facebook access to their personal data, this may not mean that this is in accordance with the law in every country. Protection of personal data will become more and more an important subject for politicians. This may mean that Facebook may lose ways to efficiently monetize its website.

The de facto monopoly in the social community space can also become a roadblock to Facebook. It might be possible that Facebook will have to open up (and share data) with competitors in the future

Looking at the multiples at the first trading day, such as P/E (104x) or comparing the market value (104 billion) to the number of members (900 million), which yields to a value of $ 115 per FB account, then Facebook seems to be valued astronomically high. Facebook needs to prove in the near future that it is able to earn significantly more per member than it had been the case in the past.

It is difficult to say whether the Facebook stock is a “buy” or a “sell”. Using traditional metrics to value a company, the stock is overprized. And also that a single user during his customer lifetime should be worth $ 115 seems to be high. On the other hand, the opportunities to increase revenues are great. There has never been a worldwide social network of such a size. Barriers to entry may be low on the technological side. But convincing a huge number of users to spend their time on a new social platform is a much more difficult task.

We would like not to make any buy or sell recommendation on Facebook. It is up to every investor to decide for themselves if the FB stock will increase in value in the future or not.

As we are a FX trading portal, we would like to point you to the possibility to daytrade the FB shares with Contracts for Difference. With a CFD, you can earn a lot of money in a very short time frame (of course with a corresponding high risk of losing most if not all of your investment). If you want to trade CFD on Facebook shares, you can do this with a CFD broker such as Plus500 or AvaTrade.


Continue reading here:
• An Introduction to the Bitcoins
• Gold: History and Trading Gold online
• Contracts for Difference
• Forex Broker with CFDs
• Why trade forex over stocks and binary options?
Important disclaimer: Please be aware that trading Forex or CFD means that your capital is at risk. Please make sure to fully understand the risks involved.
77% of retail investor accounts lose money when trading CFDs with Plus500.

Find out more or adjust your settings.

This website uses cookies so that we can provide you with the best user experience possible. Cookie information is stored in your browser and performs functions such as recognising you when you return to our website and helping our team to understand which sections of the website you find most interesting and useful.

Strictly Necessary Cookie should be enabled at all times so that we can save your preferences for cookie settings.

If you disable this cookie, we will not be able to save your preferences. This means that every time you visit this website you will need to enable or disable cookies again.